Yes I made Marmalade.

To be frank, its not long back when I didn't even know what marmalade is. Let alone I would imagine making it. But I was planning to make the traditional Christmas Cake this time. The recipe for the cake needed marmalade. I got excited and scared. First of all, I read in detail about the major differences between marmalade and jam. What happened next is part of history now and this post is a proof of it.

I don't usually go out buying things if I can make them myself. Even if I am time or ingredient pressurized. I didn't had oranges but I had something very similar from the citrus fruit family. I had kinnows. It looks very similar to orange. It has a lot of seeds in it so it is not that easy to eat it. My sister and brother in law had bought kilos of it over the weekend and I utilized about a kilo out of them. The traditional orange marmalade uses seville orange which is a much bitter tasting orange and hence is used in making marmalade. Seville Oranges are also preferred for making marmalades as their seeds have high pectin content (pectin helps in setting up the jam). I reduced the amount of sugar in the recipe to balance the bitterness of the much sweeter kinnows.

I made so much marmalade that it filled 1 big and 2 smaller jars. Smaller jars would make good gifts for my friends whom I am about to visit. :)

What is the basic difference between marmalade and jam? While making marmalade, the peel is also added and cooked. The peel adds to the bitterness of the fruit preserve.

Making marmalade is not a lot of hard work. But yes, it does require you to follow a series of steps and takes a few hours to cook. Believe me, its all worth the effort. ;)

Ingredients:
1. 1 kg Kinnows ( You can use a different version of orange and adjust the sugar accordingly)
2. 900 g sugar
3. 2 litre water


Steps to make the marmalade:

1. Wash the oranges. Remove the peel by making cuts on the peel which divides it into four.
2. Chop the peel. I chopped it to a width of 2-3 mm that is neither too thick nor too thin. You can chop as per your liking.
3. Put the peel in a cast iron pot.
4. Squeeze the juice out of the peeled fruit in the pot. Carefully remove the seeds and keep them aside.
5. Chop the flesh from which juice has been squeezed out and add to the pot.
6. Take a muslin cloth and place the seeds in it. Tie the mouth of the cloth and put it in the skillet.
7. Add water.
8. Cover and bring the mixture to a boil. Let it simmer on medium heat till the peel becomes soft and translucent. It took the mixture around an hour to reach that point.
9. Let the mixture rest overnight. ( I covered it and left it on the gas)
10. Remove the cloth from the mixture while squeezing the juice out of the cloth back in the skillet (make sure the mouth of the cloth remains tied up).  The seeds were cooked with the mixture as they contain pectin which helps in setting up of jams or marmalades.
11. Bring the marmalade to boil. Add the sugar and stir well while still on boil.
12. Cook on medium flame while stirring occasionally for about 30 minutes to an hour or till the marmalade reaches the point where it can set.  To check for the setting point, place a few plates in the freezer. At an interval of 5-7 minutes (after the initial 30 minutes), place some of the marmalade on the plate taken out from the freezer. If the marmalade is runny, keep cooking. If it sticks and is wrinkly, the marmalade is done. Wrinkly means, if you push the marmalade with your finger, wrinkles appears on its surface.
13. Keep some air tight jars well washed and dried up. As soon as the marmalade is cooked, pour it in the jars and seal well.
14. Let the marmalade jars rest overnight. 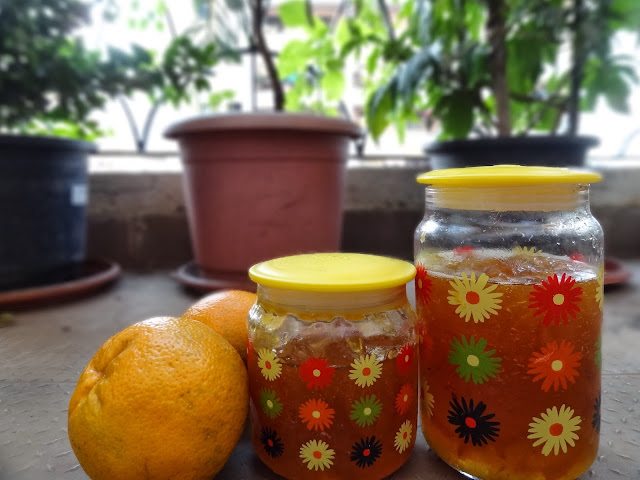 Enjoy the marmalade. Use it in desserts or spread on toasts. ;)

Soon enough I am going to post a recipe of Christmas Cake which uses it. :)
Posted by Priyanka at 3:12 AM 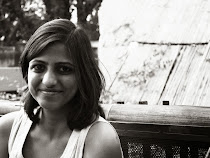